IPCC report – How can the necessary emission reductions be achieved?

The Intergovernmental Panel on Climate Change (IPCC) has presented the third volume of its Sixth Assessment Report. It emphasises the need for rapid and far-reaching greenhouse gas reductions in order to comply with the Paris Climate Agreement. DLR Projektträger (DLR-PT) was involved in the report’s adoption with the German IPCC Coordination Unit.

Climate protection policies and climate-friendly investments are becoming more widespread, but the Nationally Determined Contributions (NDCs) submitted to the United Nations Framework Convention on Climate Change (UNFCCC) cannot limit warming to 1.5 degrees. Even limiting warming to 2 degrees would require an abrupt increase in these efforts from 2030. 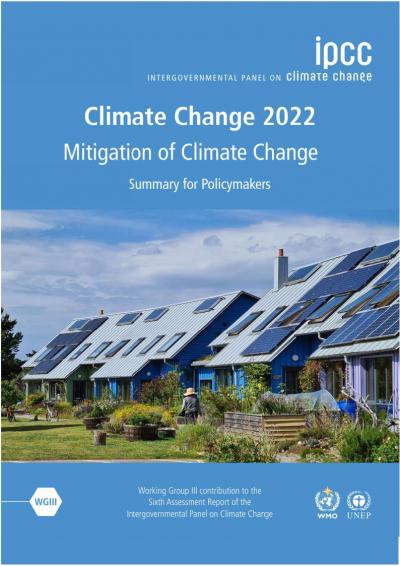 To meet the Paris climate targets, drastic greenhouse gas emission reductions are necessary in all sectors and regions. The longer necessary climate protection measures are delayed, the greater the dependence on methods for removing carbon dioxide from the atmosphere (Carbon Dioxide Removal, CDR) will become in order to be able to limit global warming to 1.5 degrees or 2 degrees – and perhaps even to cool the atmosphere again.

This is the conclusion of the IPCC Working Group III's contribution to the Sixth Assessment Report on Climate Change Mitigation. It was adopted in March 2022 in a virtual plenary meeting of the IPCC.

How can climate change be limited?

The report assesses progress in reducing emissions. It also highlights the range of climate action available – in energy systems and cities, and in sectors such as agriculture, forestry, land use, buildings, transport and industry. And it places these measures in the broader context of sustainable development.

The staff of the German IPCC Coordination Unit (De-IPCC) at DLR-PT were actively involved in the adoption of the report as members of the German delegation on behalf of the Federal Ministry of Education and Research (BMBF) and the Federal Foreign Office (AA), contributing their knowledge and experience in the fields of climate science and climate and research policy.

The De-IPCC also accompanies national public relations activities for the adoption of the report. Information on the report and a press release on the publication are available on the website of the coordinating body.

De-IPCC colleagues prepared news releases and social media contributions on IPCC-relevant research projects for the BMBF as part of its Research for Sustainability (FONA) strategy. They also translated the report’s key statements into German in close coordination with the authors and colleagues in Switzerland and Austria. At the end of April 2022, the German IPCC Coordination Unit will host a discussion event on the IPCC Sixth Assessment Report.

The Intergovernmental Panel on Climate Change is an institution of the United Nations. On its behalf, experts worldwide compile and classify the current state of knowledge on climate change. The IPCC provides a basis for political decisions without, however, making concrete recommendations for action.