Official kick-off – since the 1st June 2022, the "Plastic Pirates", already successful in Germany, have also been available to research plastic waste in flowing waters in other countries. DLR Projektträger, which oversees the initiative in Germany’s Education and Research Ministry, is now coordinating its implementation at European level, too.

3rd June 2022 — "Plastic Pirates – Go Europe!" This is the motto of a very successful initiative against plastic waste on and in rivers which can now also start in more countries outside Germany . After the initiative was already extended to Portugal and Slovenia during the German European Union Council Presidency 2020, the EU Commission is now funding its introduction in other EU Member States and associated countries over a period of 30 months. DLR Projektträger (DLR-PT) is coordinating the entire initiative and supporting the new partner countries with its many years of experience from Germany.

Identifying and mapping plastic waste in and on rivers

The "Plastic Pirates" are a citizen science initiative that aims to raise awareness of rivers as common lifelines and for the protection of natural resources. Large amounts of plastic waste enter the oceans and seas via streams and rivers. There, at the latest, micro- and macroplastics become a danger to animal and plant life and damage the regulating role of the oceans. Researchers have long been concerned about where exactly the waste gets into the rivers and what effects plastic has on living creatures in flowing waters and oceans. In the countries of Europe, however, as in the rest of the world, there is a lack of precise data. The Plastic Pirates help to close this gap by having school classes and youth groups determine and map the amount and type of plastic waste at and in flowing waters. The data is then uploaded to an online map and made available to the scientific community.

The expansion of the initiative to Europe is funded by the EU Commission through the international "Europeanisation of the Plastic Pirates” citizen science initiative as part of the Framework Programme for Research and Innovation, Horizon Europe, in the area of the Mission for Healthy Oceans, Seas, Coastal and Inland Waters. 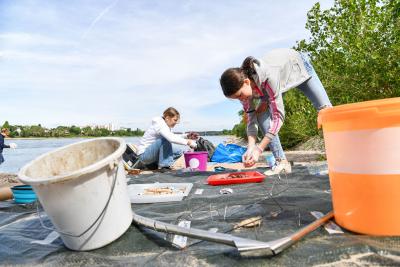 DLR Projektträger is responsible for the international coordination of the measure, mobilises schools and youth groups in cooperation with the respective partner countries and translates the accompanying teaching materials into the official languages. In addition, it offers training workshops on the initiative itself, on press and public relations activities around the Plastic Pirates, and on how to conduct data analysis. Together with the partner countries, further development of the citizen science methodology is also being sought.

"Plastic Pirates – Go Europe!" is an initiative that the Federal Ministry of Education and Research (BMBF), with the support of DLR Projektträger, has introduced into the European agenda for implementing the European Research Area (ERA). As part of the ERA campaign "Bring Science closer to Citizens", the expansion of the initiative contributes to the realignment of the ERA (ERA Policy Agenda 2022-2024). As one of the first pilot initiatives, "Plastic Pirates – Go Europe! has a pioneering character for future initiatives of the new European Research Area, also in other thematic areas. DLR-PT supports the BMBF conceptually and in an advisory capacity in European research policy and in the implementation of ERA measures in Germany.